This week you get two back posts for the price of one.  The first post, Buildings – Introduction was first published back in March 2017 but as it didn’t have much to say (I was still finding my way around WordPress) I decided to add the post which followed it too – 28mm Building Project No: 1 – Undertakers & General Store.

Both are now on my archive site TIM Gone By.

As a kid I can remember Britains toys adding to their swoppet range by introducing western buildings and I can recall having been given the Bank, Jail, Hotel, Ranch House and Livery Stable as christmas and birthday presents.  I mention this only because it was these memories which inspired me to want to go beyond just painting figures to adding buildings to my modelling.

One of the first things to consider is the scale you want to build in.  As a modeller I had for the most part painted 54mm figures up to this point and as a consequence my initial idea was to build in this scale.  I soon realised that this presented two problems. Firstly, the constructed building would be quite large.  Secondly, how would I store or display it and keep it free of dust?

Pathetic as this sounds it took me a while to reach the obvious answer – build in a smaller scale!  I had only ever really considered 28mm to be a war gaming scale and as such had never properly looked at available figures and accessories. Needless to say a quick internet search opened up an entire new world and I haven’t looked back since.

I am by no means an expert on constructing buildings, if I were then I would would not be The Imperfect Modeller.  However, in a short period of time I have managed to move on from simply constructing and painting bought buildings to constructing my own frrom scratch, a most rewarding experience.

In this series of posts I will go through the evolution of my buildings.  In the meanwhile a picture below of a Livery Stable I constructed completely from scratch. It’s not without it’s faults (which I will highlight going forward) but it was only my third building ever.

As mentioned in my previous post, I decided that scaling down to 28mm was my best option if I wanted to include buildings within my dioramas.  Having reached that decision a quick internet search for 28mm old west Buildings led to my discovery of Sarissa Precission’s website (http://www.sarissa-precision.com).  Sarissa have a whole host of buildings covering various periods including the Old West and North America both of which were of interest to me.

Sarissa’s buildings are made of MDF with laser etched detail, fit together perfectly and look very good when made up.  They were just what I was looking for and so I purchased two of them for the model pictured below.  The building on the left is Old West model code SmallPLUS Building 1 and the building on the right is Old West model code SmallPLUS Building 4.  For both buildings I also purchased the optional apex roof (I’m no fan of the characterless flat roof that comes as standard).

The aim of the diorama was to simply capture a moment in time on the street of a western town.  The buildings themselves were simply painted but, as can be seen from the additional photo’s below, I also chose to fit out the insides of both buildings. For reference all the figures in this diorama are from Dixon’s Miniatures (http://www.dixon-minis.com) and the various internal accessories are mostly from Frontline Wargaming (http://www.frontlinewargaming.co.uk). 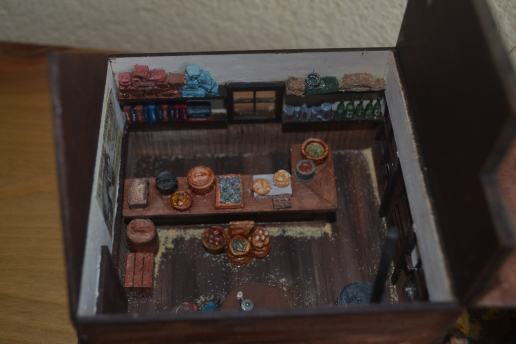 Inside the General Store 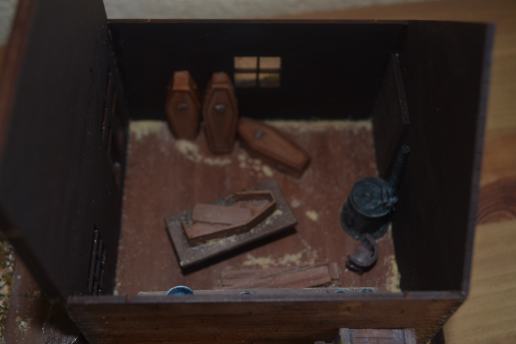 The only minor adjustments I made to both buildings was to add clear plastic glazing where appropriate to doors and windows, to make a hole in each roof for the chimney of the wood burning stoves and to add the main signage (this was done using Word together with a downloaded western font which was printed and given a light colour wash).  Overall I was pleased with the outcome of my first building but as is often the case we are often our own worst critic and so, on closer inspection I felt there were improvements which could be made next time around.

A better painter than me would have been able to add depth to the wood of the building and to the roof tiles.  That was beyond my skill set and so my overall impression was that the end result was rather flat and lacking in character and depth.  How I could improve upon this came to me in Burger King while I was stirring my coffee – use real wooden coffee stirrers for cladding!  Which leads nicely onto the subject of my next post, My Second Building.