This weeks 28mm mini is a figure from the Artizan Thrilling Tales range and goes by the name of “Mr Harries”.  No real reason for buying this figure other than the fact that I quite liked the character and thought he would be nice to paint. 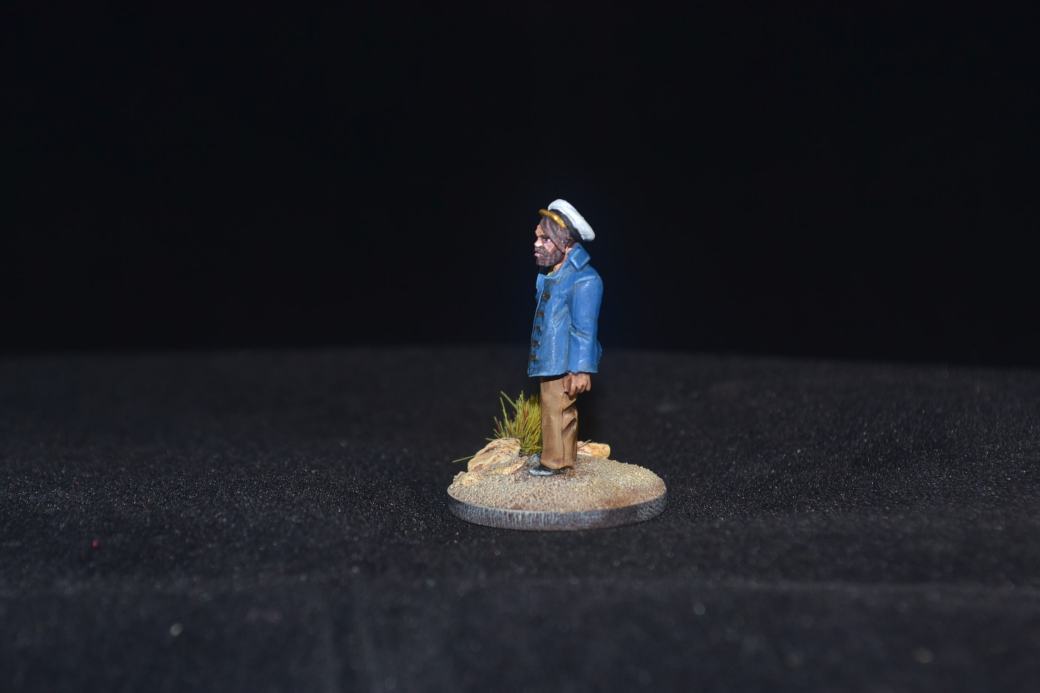 In general women have a lot of qualities I admire.  Top of the list has to be that two women can go to the toilet together and nobody bats an eye.  A bloke would never ask his mate the same question.  Lower on the list is their ability to be pissed off, never show that they are but never forget that you annoyed them.  They mark your card and bide their time.  I believe Black Widow spiders act in much the same way.

Now a while ago She Who Must Be Obeyed bought some new towels for our en-suite bathroom.  “What colour do you want?” she asked me.  I had a choice between a plum/purple colour or a jade/green.  To be honest I couldn’t get excited either way and simply said “They’re just towels, you choose, I’m not bothered”.  She smiled sweetly and chose the jade/green for herself and that was the end of the matter.

A week or so later I was sitting at my desk painting.  Messing about with a Reaper Wizard figure that I had picked up and put down more times than I care to remember.  Dutifully bringing me a nice cup of tea I took the opportunity to ask her “Do you think I should paint his cloak blue or purple?”. “It’s just a figure” she said “I’m not bothered one way or another”.

Even though she had her back to me I swear she was smiling.

Looking at my stash of models and figures the other day made me realise that perhaps things had gotten a little out of hand.  The days when I would work on one model at a time before starting on the next project has become a thing of the past.  It was time for some self imposed discipline and the establishment of some rules.  From now on I will only buy things as  I need them to complete my ongoing project unless …

… I have a discount voucher to use up,

… I see something special at show trade stand,

… the supplier is offering free postage for a limited period,

… I have nothing else I want for a Christmas present or to spend birthday money on,

Now, as long as I stick to the rules it will only be a matter of time before I gain full control.  Everyone needs a plan.

… Alice Cooper and “School’s Out”

With our holiday less than two weeks away and my daughter now finished school for another year this seemed appropriate.  Takes me back to 1972 and a period of teenage attitude.  Happy days! Must have watched this a few times now and each time I do it never fails to highlight what a bunch of wankers some of our politician’s were.  Sadly little has been learnt and the current crop leave a great deal to be desired too.  The more I read or watch about WW2 the greater my respect for the fighting men and women of the era.  Civilians too are equally deserving of praise.  That said, it’s amazing how twists of fate and not just strategy and bravery alone often proved significant to the outcome of not only this war but countless others as well I suspect.

A couple of years back I took my daughter up to London to show her family roots.  As part of the trip we did the tour of the Houses of Parliament.  Standing in the House of Commons I tried to soak up all the decisions which had been taken in that room which changed the world.  If you have never done it do yourself a favour and take the tour.