Those of you who follow my blog will be aware that I have been keen to start a new building project and over the last few days I’ve managed to get things started.  The diorama when complete will be a further addition to my WW1 series.  I’m not sure I would describe it as the centre piece but it will be the largest piece in the eventual timeline.

Some modellers I know begin their next project by sketching out plans for the proposed build, I’m not one of them.  I’ve never really worked from sketches, mainly because I’m useless at drawing and so learnt instead to formulate and retain all the details in my head.  I can’t therefore share with you a picture of what the end result will look like until it’s complete.  However, the basic idea behind the model is that of a rustic type cottage/farm-house on the French/Belgium border with two or three civilians/farmer types watching as a dozen or so British troops pass through their land on their way to the frontline.  Not very exciting I grant you but the best excuse I could come up with for the type of building I wanted to construct.  In my head it looks OK!

One thing that I do though before starting a new diorama is create a written list following a brain dump of all the things I could potentially include in the model.  I then use it as a check list as I go along.  I then look to see what’s in my bit box and follow this by working out what I can scratch build and what, if anything, I might need to buy.  For this model the list, which will most likely be added to, currently looks like this: –

The starting place for all my buildings is the base.  Paul at “Just Bases” does some nice stuff and the biggest base that he does which has an acrylic cover measures 351mm x 201mm x 135mm high and is reasonably priced.  Someday I’ll do something bigger but storing it will be the difficulty and packing it away to keep the dust off of it seems a shame; for now this is as big as I go.  So, taking account of the base dimensions I decided to go with a building which measuring 190mm x 100mm x 100mm high.  I also decided that the walls of the cottage would be stone in appearance and that the roof would be fixed and not removable like some of my previous builds.  I also decided that the basic construction would be made using 3mm thick MDF which would then be suitably clad.  I have used cardboard and foam board before but find they both bow as the cladding dries out which doesn’t look great and makes it harder to assemble the sides and ends.  The MDF warps a little but it’s minor by comparison.

Having made these decisions my first step was to measure and mark out the sides and ends followed by the locations of doors and windows.  The first buildings I ever constructed were MDF kits produced by Sarissa Precision which were excellent but very two-dimensional.  My painting skills weren’t, and still aren’t, good enough to produce a 3D appearance so I went with cladding to achieve some relief for shading and highlighting.  However, what these kits did give me was an easy way to achieve 28mm scale measurements.  For this build the doors measure 40mm high x 25mm wide and the windows are 20mm square.  One door and window to the back wall and one door and two windows to the front.

My next step was to cut out the four sides and check assembly.  This was followed by marking out the door and window locations and then cutting them out too.  Once done I used match sticks to make window and door frames which were then glued in place and left to dry.  Once dry, each side of the building was in turn coated with DAS clay which was then levelled and smoothed out.  I had never used this clay before but was advised via a YouTube tutorial to add PVA to make a kind of dough mix.  The PVA apparently prevents the dried clay from future cracking.  Having only ever done this once I have no idea if this is true or not but I figured better safe than sorry and besides it did seem to make sense too.

Before the clay dried (the clay air dries and does so reasonably quickly but I thick adding the PVA slows the process down) I used my recently acquired “Green Stuff” textured rolling-pin to produce the stone effect.  This was another first and I was extremely pleased with the result.  It is best to wet the rolling-pin a little as this prevents it from sticking.  I also found that it worked better to roll the pin forward a little and then roll it back on itself again making small advances as you move along.  Rolling back enables the impression the roller makes to be more defined but if you go to far forward the roll back is less likely to line up accurately with the initial impression made (I hope this makes sense!).  Once done I cleaned the rolling-pin up using soapy water and a nail brush before any clay residue had a chance to set.

Having let everything dry overnight I then wanted to complete a couple of other things before assembly.  The first was to complete the door and window on the rear wall.  I decided the door would be in a shut position and the window, which would have wooden shutters, would have these closed too.  For both the door and the window shutters I used wooden coffee stirrers cut to length and glued in to place.  Holes were drilled in both the door and window shutters to accommodate the tip of cocktail sticks which were used to make knobs and handles.

The second item I wanted to complete before assembly was to construct and glue into place the internal window frames.  In the past I have tried to use all sorts of materials for this and haven’t been truly happy with any of them.  I think it’s the scale which has given me the difficulty as I just couldn’t get things to line up as I wanted or make them without breaking.  However, following a moment of inspiration I tried using some preformed mesh wire, the same as I had used to make railings on a previous model, and found this worked very well.  I rebated the MDF at the back of the front wall a little and inlaid the section of wire and then glued it into place and left it to dry.

Once everything was dried it was time to test the assembly before gluing.  A little sanding was required to ensure a smooth fit although it was evident that some filler would be needed at each of the corners once put together.  To ensure a stronger bond I glued small sections of foam board to each internal corner and then held everything in place with a few elastic bands to pull it all together before leaving it all to dry.

Next up is the roof, windows and shutters, the door and the Chimney and …… but these will have to wait until part 2. 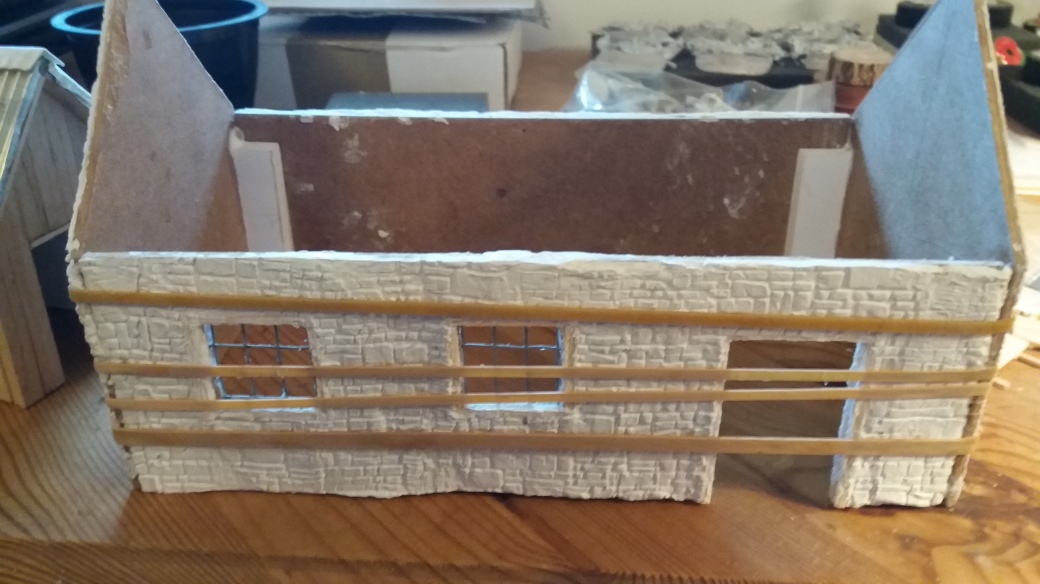 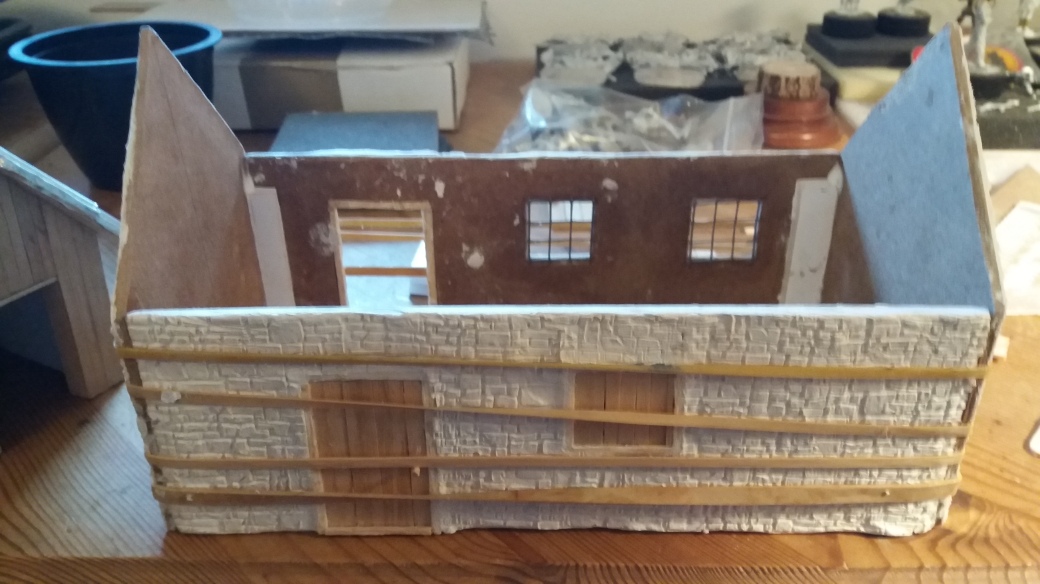